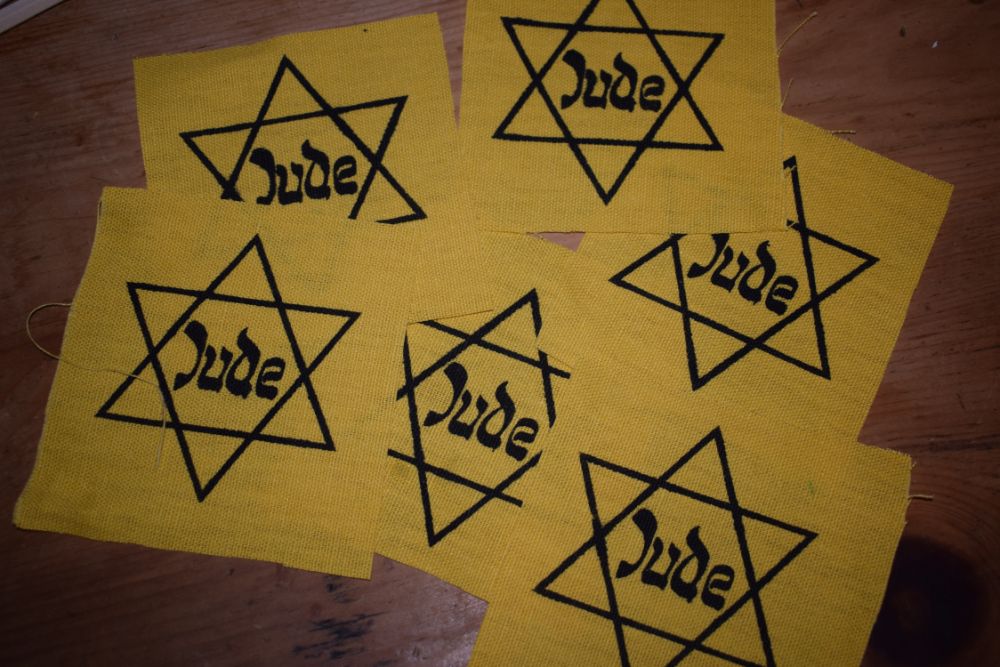 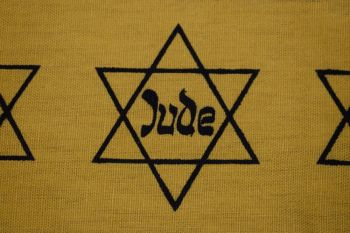 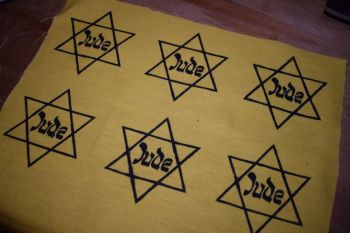 Star of David - The Yellow Star

These historical artifacts are reproduced for educational purposes only!!

During the Nazi era, German authorities reintroduced the Jewish badge as a key element in their plan to persecute and eventually to destroy the Jewish population of Europe. They used the badge not only to stigmatize and humiliate Jews but also to segregate them and to watch and control their movements. The badge also facilitated deportation.

Nazi propaganda minister Josef Goebbels was the first to suggest a "general distinguishing mark" for German Jews in a memorandum in May 1938. Security Police chief Reinhard Heydrich reiterated the idea at a November 12, 1938, meeting convened by Herman Göring following Kristallnacht. In both cases no immediate action was taken.

In September 1939, following the German invasion of Poland, individual German military and civilian authorities imposed the Jewish badge in certain Polish towns and villages, the first being decreed in the town of Wloclawek on October 29, 1939. In the General Government, that part of Poland directly occupied by Germany, Governor General Hans Frank ordered on November 23, 1939, that all Jews over the age of ten wear a "Jewish Star": a white armband affixed with a blue six-sided star, worn over the right upper sleeve of one's outer garments. There were heavy penalties for those caught not wearing it.

Then, on September 1, 1941, Reinhard Heydrich decreed that all Jews in the Reich six years of age or older were to wear a badge which consisted of a yellow Star of David on a black field to be worn on the chest, with the word "Jew" inscribed inside the star in German or in the local language. This applied to all German Jews and Jews in Germany's annexed territories: Alsace, Bohemia-Moravia and the Warthegau (the German-annexed territory of western Poland).

In German-occupied western Europe, attempts to introduce the badge were met by varying degrees of opposition by the local population, officials, and even the German military.

German occupiers imposed the badge in Belgium and the Netherlands in the spring of 1942. The German military commander in France ordered all Jews over six years of age to wear, on the left side of the chest, a yellow star the size of a person's palm, with the inscription "Juif" inside. This ordinance was issued on June 7, 1942, although bureaucratic resistance on the part of French officials meant that a similar measure was never applied in Vichy France, even when German forces occuped those regions of France in November 1942.

In Denmark, the "Jewish badge" was never introduced. There is no truth to the much-repeated story that Danish King Christian X wore a yellow star in solidarity with the Jews. This myth may owe its origins to a remark the king is said to have made to his finance minister, Vilhelm Buhl, that if the Germans introduced the star in Denmark, "perhaps we should all wear it."

In Norway, the badge was never introduced, although after January 10, 1942 all Jews had to carry identification cards stamped with the letter "J."

Many of Germany's allies followed the Nazis' lead and imposed variations of the badge upon their own Jewish populations. In Croatia, following the appearance of German troops in Zagreb and the creation of an independent Croat Republic allied with Germany, Jews were ordered to wear a badge in May 1941. The badge was unusual in that it consisted of a large yellow rectangle with the Star of David in it and the letter Ž for Židov: ("Jew" in Croatian), or sometimes the word itself, at the bottom.

In the Slovak Republic, established in 1939 as a Roman Catholic ally of Nazi Germany, the badge was introduced on September 9, 1941, as part of comprehensive anti-Jewish legislation which redefined Jews along racial lines.

In Hungary, there was resistance to the badge, and it was not introduced until March 1944, after the German invasion of the country and the ouster of the Kallay government which had previously rejected the measure.

The Bulgarian cabinet ordered the wearing of the badge, which was made of yellow plastic, on August 26, 1942, but the measure was unpopular with Bulgarians. Noncompliance was widespread, with only a fifth of the Jews in Sofia wearing it.

In Romania, the yellow Star of David was introduced in the occupied provinces of Bessarabia and Bukovina from September 1941 and in Transnistria in July 1942. However, in the Regat (or the "Old Romanian Kingdom," because it represented the original pre-1914 borders of the country) there was little enthusiasm for the introduction of the badge, except in Moldova (Moldavia) where Jews were forced to wear the badge under German pressure beginning in May 1944.

Certain individuals were exempted from wearing the badge, although such exceptions were more common in western than in eastern Europe. Those who were allowed to not wear the badge included, among others,